The Orchard Avenue area is historically significant as the center of the Hubbard Estate, a country retreat and “gentleman’s farm” developed and maintained by three generations of the Hubbard family from the late 1860s until World War II.

For many years, this estate was the third largest in Weston, encompassing over 300 acres at times in its history. The estate was established in 1867 by Charles Townsend Hubbard, a wealthy manufacturer of coarse fabrics and rope made of jute fiber grown in India. 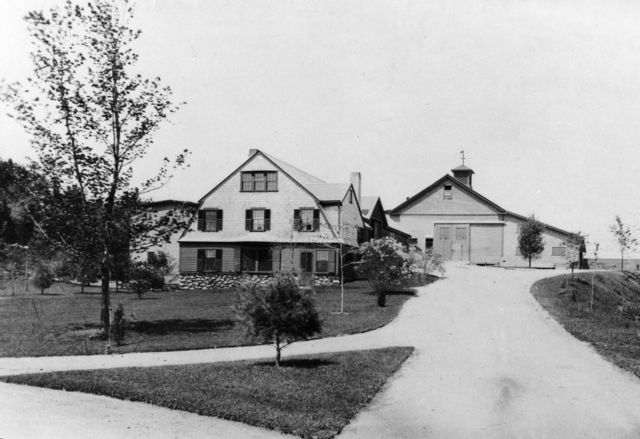 The Hubbard family made major contributions to Weston, particularly in the area of conservation. Charles Wells Hubbard worked to preserve the land along the Charles River as recreation and conservation land, establishing the Riverside Recreation Grounds and donating the 19-acre Weston Park (now part of Leo J. Martin Golf Club) to the town. His son-in-law, Stanley French, was a founder of the Weston Forest & Trail Association, which has preserved many acres of land along Orchard Avenue within the area defined by this form.

Charles Wells Hubbard was also responsible for the initial development plan for the “Chiltern Hundreds” subdivision in Weston and Wellesley just south of Orchard Avenue, built on former Hubbard land.

The area included within the Orchard Avenue Area Form was originally part of the 214-acre Slack Farm, which extended to the Charles River. In 1867, Slack descendants were unable to pay their mortgage, and the farm was sold by public auction to Charles Townsend Hubbard (1817-1887) Hubbard had three daughters from his first wife, Louisa Seward Hubbard, who had died at a fairly young age. By the time of his move to Weston, Charles T. and his second wife, Elizabeth Wells, had two more children: Charles Wells and Anne. In the 1870s, C. T. Hubbard purchased several hundred additional acres in the vicinity of the Slack Farm.

In the early 1870s, as C. T. Hubbard’s three oldest daughters married, he gave them each a parcel of land near the Slack Farmhouse. His oldest daughter, Louisa, and her first husband, John C. Jackson, built a house in the French Academic style with a mansard roof. This house was torn down in the next generation to make way for a granddaughter’s house, but as of 1997, the farmer’s house for the Jackson’s, which also has a mansard roof, was still standing on the former Jackson lot at 100 Orchard Avenue (ca.1774, Map #7).

In 1873, Hubbard’s daughter Elizabeth married scientist and inventor Francis Blake. The Blakes built a house, which was originally located just outside the bounds of the Orchard Avenue Area, at 44 Tamarack Road, but has since been demolished.

The youngest child, Anne, married Bancroft C. Davis in 1882. Davis was trained as a lawyer but spent much of his life as a serious “gentleman farmer” in Weston, building up the “Ferndale Farm” dairy. The Davis’ started planning their house, “The Pines,” at 59 Orchard Avenue (1882, MHC 615, Map #20) in the spring before their marriage. In addition to the main house, a small house was built in back for the Davis gardener and an apartment over the garage for the chauffeur.

Charles Townsend Hubbard’s only son, Charles Wells Hubbard, was not married until 1889. By that time, C.T. Hubbard had built his own mansion, “Ridgehurst,” where he lived until his death in 1887. The Shingle Style house, which still remains at 80 Orchard Avenue (1881-3, MHC 378, Map #1) is set on a ridge with panoramic views south over the Charles River to the Blue Hills.

The house took a year and a half to build and cost $65,000, a staggering sum at the time. The house was designed by Francis Chandler, who was associated with Edward C. Cabot until 1888, when he withdrew to become professor and later head of the Department of Architecture at Massachusetts Institute of Technology. Family tradition holds that Frederick Law Olmsted himself was involved in the original plantings around the Ridgehurst mansion.

The Death of Charles Townsend Hubbard

From Charles Townsend Hubbard’s death in 1887 until the end of World War I, the Hubbard land on the Orchard Avenue side of the railroad tracks remained largely undeveloped. Occasionally, a house lot was carved out for a relative or family friend.

Hubbard moved his other farm buildings to their present location in the vicinity of 119 Orchard Avenue, where he developed a complex of wood frame barns and outbuildings housing farm operations. These included:

The Hubbard estate had its own water system. Initially, this water came from a well in the vicinity of the small stone pump house still standing on Orchard Avenue (part of the property numbered 136 Ridgeway- MHC 611, Map #14). Located within the Orchard Avenue Area is the reservoir for a second water supply system which belonged to the Blake Estate (marked on map).

In the deed, Hubbard included numerous restrictions: the house had to cost at least $10,000, the stable $1,000, the buildings had to be set back at least 25 feet from the street, no fences could be erected along the roadway or within 20 feet of it, and no “mechanical or other trade or manufacture of any kind, and no shops, stores, or livery stables” were allowed. 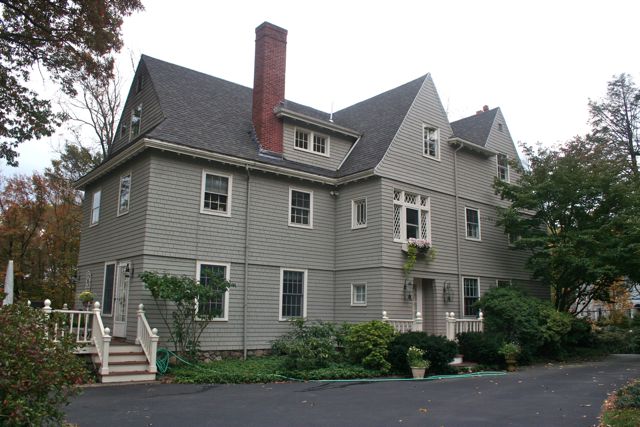 In the fall of 1910, Charles W. Hubbard contacted Olmsted Brothers requesting assistance in designing the grounds around his estate mansion. Part of the work involved integrating a billiard room addition which was in place at the time plans were drawn by civil engineer Henry F. Bryant in October 1910.

According to tradition, the billiard room was added for C. W. Hubbard’s son, Charles Jr. and his Harvard college friends. In later years, this billiard room addition was removed from the main house and moved to its present location at 74 Orchard Avenue (MHC 608, Map #2) In 1911-1912, Olmsted Brothers designed a formal Italian garden (MHC 915, Map #1B) with stucco garden houses and pergolas which still remains at 80 Orchard Avenue.

By the 1910s, the older Hubbard children were reaching early adulthood. C. W. Hubbard’s oldest daughter, Elizabeth, married U.S. Navy career officer John Forsyth Meigs in 1913. Hubbard built them a house,"The Knoll,” at 164 Orchard Avenue (1912, MHC 610, Map #10). After only a few years on Orchard Avenue, Meigs was transferred to China as part of a distinguished career from which he retired with the rank of Commander.

As his oldest children left home, Charles Wells Hubbard must have taken stock of the enormous size of Ridgehurst and number of servants needed to maintain it. The servants’ quarters was in a large wing on the north side of the main house. In the early 1920s, this entire wing was removed, placed on rollers and pulled by horses across the fields to 153 Ridgeway Road, where it was converted into a separate house. Some years later, the billiard room was removed from the back of the main house and moved to its current location at 74 Orchard Avenue.

When the United States entered World War I, Charles and Anne Hubbard converted the Cushing stable complex into “Barnstable House” (140 Orchard Avenue, 1919, MHC 609, Map #9). After C. W. Hubbard moved out, “Ridgehurst” was rented or left vacant until his son, Charles Jr., moved there for a time in the 1930s.

The house, which the Wheelers called “Glen Acres,” was originally the home of wealthy mercantile trader, John Burleigh. On the property is a small outbuilding (MHC 381, Map #6) used as a playhouse and guest house, which, according to notes from Mary Hubbard French, was once a wing of the Slack farmhouse. The Jackson’s mansard-roofed Farmer’s cottage (ca.1874, Map #7) remains on the property as of 1998.

The house at 92 Orchard Ave (Map #4) was built about 1937 by Charles Wells Hubbard, Jr. and his wife, Dorothy, on the site of the Hubbard’s large stone stable / carriage house / garage.

The house at 136 Ridgeway (Map #15), which is located between Ridgeway and Orchard Avenue, also has a connection with the Hubbard family. This house was known as “Bide-a-wee,” and by family tradition was used at some time in its history as a retreat for tired businesswomen and secretaries, where they could go for a few days to “get away from it all.” This house was later occupied by Charles Wells Hubbard’s youngest daughter, Mary, who married Stanley French.

French was a founding member of the Weston Forest & Trail Association and worked with Charles Wells Hubbard Jr. and the estate trustees to preserve the Orchard Avenue landscape through substantial land donations, including the Hubbard Trail and the hill and meadow on the west side of Orchard Avenue.

After her husband Stanley died in 1969, Mary Hubbard French built 86 Orchard Avenue, (Map #3)  designed by architect Marjorie Pierce. The lot was the location of the old Hubbard tennis court. 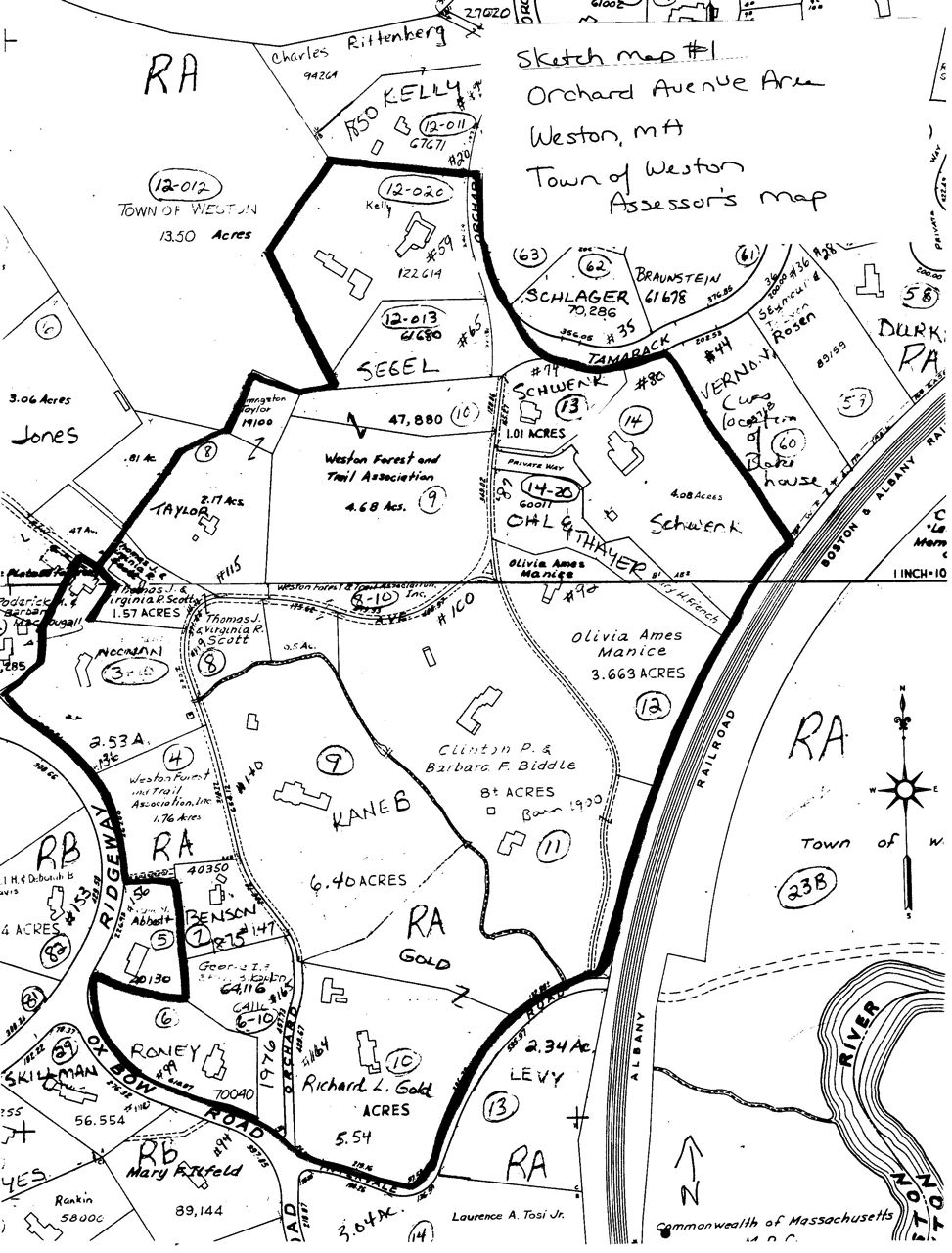