The Wellington Farm possesses integrity of location, design, setting, material, workmanship, feeling, and association. It is significant as a well-developed 18th century farmstead with continuous association with Weston’s agricultural history. It is also significant for its associations with Weston’s late-19th century vogue as a summer retreat. Finally, the Wellington Farm including main house, farmhouse, barn complex, pigsties, greenhouse, and stone wall-lined fields, is a fine representation of a New England farmstead that has evolved over several hundred years. The farm thus meets Criteria A and C of the National Register of Historic Places and is significant on the local level.

History of Ownership & Use
Thomas Pierce
The farm’s earliest owner was Thomas Pierce (1705-1789), son of Francis and Hannah Pierce of Weston. He married Mary Hayes (d. 1778) in 1728). It is believed that the present front portion of the main house was built by Thomas about 1760 as a typical 2 1/2 story, five-bay, center-entry, center-chimney, gable-roofed dwelling. Thomas and Mary had several children, as least one of whom served in the Weston Company in the Revolutionary War. According to town records, Thomas Pierce held the office of field driver in 1763 and 1766. He was one of the town surveyors and collectors in 1761. . . .It appears that Thomas and Mary fell upon hard times at about the time of the Revolution and may have been forced to sell the farm in 1770, when it passed to John Brown of Cambridge for one hundred pounds. At that time the farm was described as a homestead of about seventy acres “with all the buildings thereon.”

John Brown
Following the sale of the farm to John Brown in 1770, the homestead remained in the Brown family for over one hundred years, being owned successively by Thomas Brown, Marshal Brown, and finally by Samuel F. Clarke, a son-in-law. During the Brown family ownership, the main house was more than doubled in size, and perhaps converted to use as a two-family dwelling. Samuel F. Clarke was born in Orange, Vermont to David and Lydia Clarke in 1820. He married Louisa Brown (1823-1842) of Weston in 1847. When Samuel F. Clarke sold the farmstead in 1899, the Waltham Daily Free Press-Tribune reported that

Samuel F. Clarke
Mr. Samuel F. Clarke of Wellesley Street, Weston, has sold his estate to a well-known Boston merchant, who intends to improve the property and occupy the same as a summer residence. It contains about 140 acres, the greater portion of which is grassland. The buildings consist of a large, old-fashioned house and barn, which have always been kept in excellent repair. Among the principal attractions of the place are the grand old maple and elm trees which were planted by Mr. Clarke over fifty years ago. This has been a favorite resort for persons seeking rest and recreation during the summer season. The estate has been in the family since 1795, being owned by Mr.Brown, the grandfather of Mrs. Clarke, who was one of the early settlers and active in town affairs. Mr. Clarke has owned and occupied it since 1847. [February 10, 1899]

Robert B. Blodgett
The Boston merchant to whom Clarke sold the house was Robert B. Blodgett, who owned the property until 1905-07 and may have been responsible for some of the many turn-of-the-century changes. In 1906, the farm passed to William E. Barrett of Boston through Samuel Hudson, who may have been Blodgett’s executor.

Arthur W. Wellington
In 1907, the farm passed from the estate of William Barrett to Evelyn L. and Arthur Wight Wellington of Medford. Arthur W. Wellington made his career at the U.S. Leather Company in Boston, starting out as a messenger boy, and retiring at age 65 as president. The Wellingtons moved to Weston because their family homestead in the Wellington section of Medford was taken by the city and is now the Wellington Circle traffic area. When the Wellingtons moved to Weston, they continued to raise horses and cattle, switching from the Brown Swiss to the Guernsey breed. The farm remains in the Wellington family ownership through Arthur and Evelyn’s daughter, Nancy Wellington Danforth, and her descendants, who continue the farming operations.
Historical & Architectural Significance
The Wellington Farm is an extremely unusual survivor, reflective of Weston’s 1th, 18th, and 19th-century agricultural period. Throughout the 20th century, Weston has developed as a very wealthy suburban community and most of its former farms have been, or are being, subdivided for residential development. The Wellington Farm remains in the hands of descendants of its early 20th century owners, all of whom are committed to retaining its agrarian character. 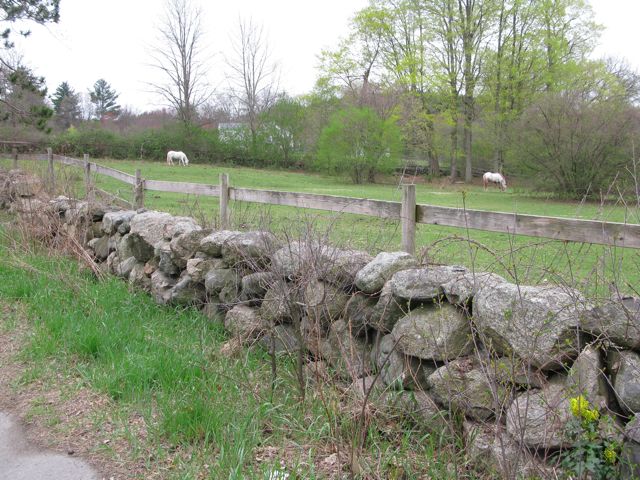 Agricultural Characteristics
While many houses from the earlier centuries remain, only a scant half dozen retain any of their agricultural characteristics beyond possible retention of a barn used for storage or other non-agricultural purposes. The Wellington Farm retains about 35 acres of open, stone wall-lined fields that are still used to produce hay for the horses that are boarded in its large barn complex; it also retains a farmer’s cottage and pigsties dating from the early 20th century, when horses and Guernsey cattle were raised by the Wellington family.

Family Farmstead
The Wellington Farm remains as a uniquely well-documented farmstead whose current bounds, based on current Wellington family ownership, retain the core of the farm as developed in the 18th, 19th, and early 20th centuries. The family remains committed to retaining its agricultural character despite substantial development pressure and the threat of the Massachusetts Turnpike widening. The acreage to the west, deeded to the town for conservation purposes, will continue to reinforce the rural qualities of the farm. National Register listing should provide a significant boost to recognition and preservation of this significant component of Weston’s agricultural history.
Plan of 1899
The plan of the farm, prepared in 1899 when the farm was sold out of the Brown family, is a rare and informative document. It not only depicts the bounds of the farm and the footprints of existing building, but also shows the location of stone walls and uses to which various fields were put. Most of the property still owned by Wellington family descendants was used as grassland or plowed fields, a use that continues today. 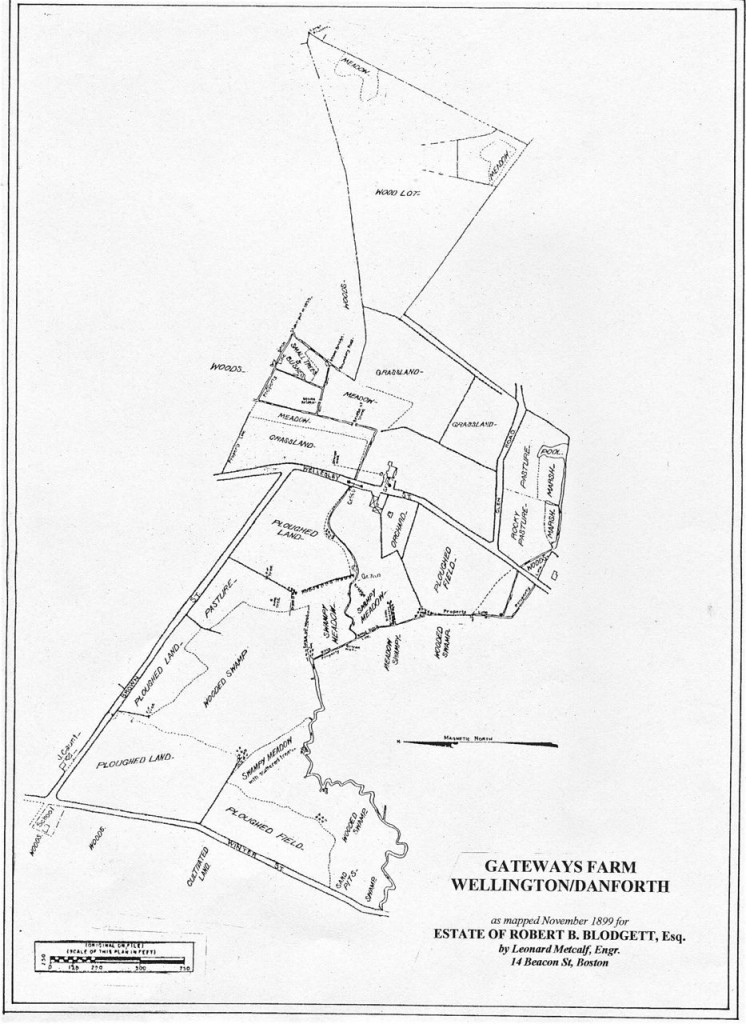 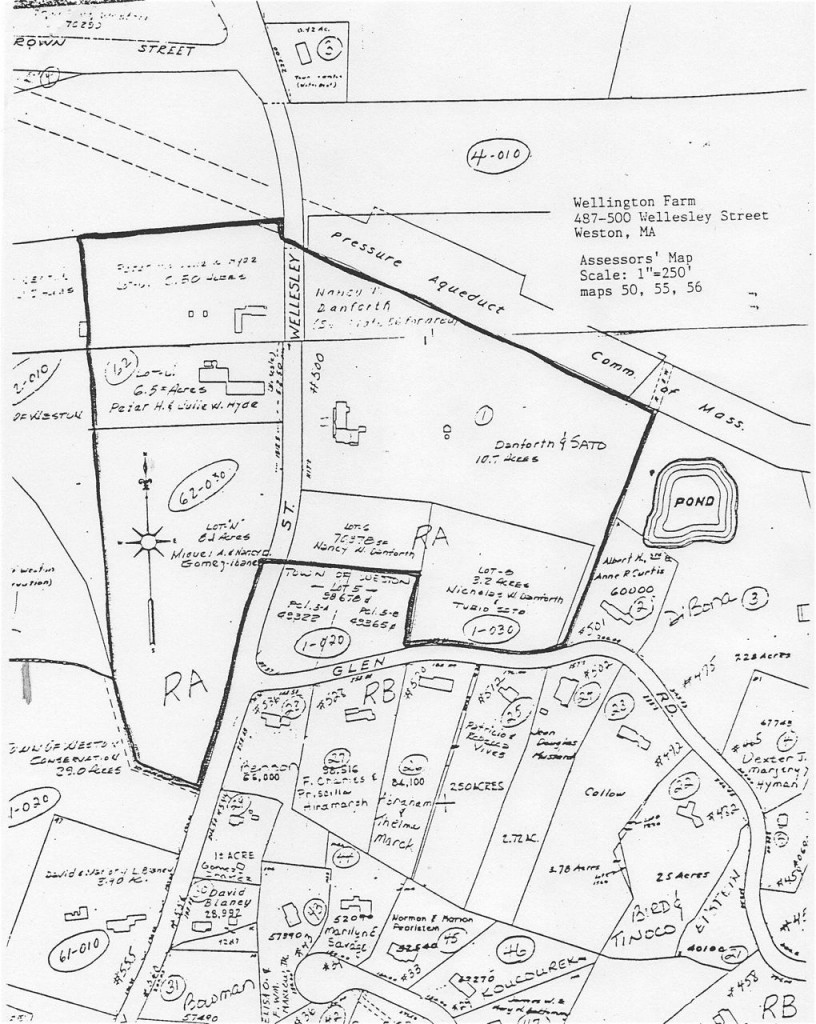