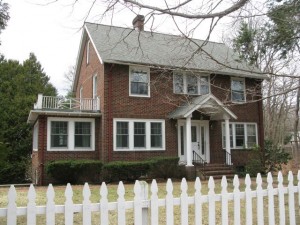 The developer purchased the 4.5 acre parcel from George H.D. Lamson, member of an old Weston family. A plan for the layout of the road was prepared in December 1929 and filed in February 1930. No lots or houses are shown on this plan (Book 5434/end). A subdivision plan showing 12 lots (numbered 1-13 with no lot #6 and no houses shown) was filed in June 1930, for “Irvington Court,” referred to as a “restricted subdivision.”  Only 10 houses in total were built, all within the next decade.

The following restrictions are listed in a deed from Connolly to Mary McManus (Book 5525/16) of December 1930, “That for a period of 20 years from October 30, 1929 no building other than a single two-story dwelling house, costing not less than $8,500 and garage to accommodate not more than two cars, shall be erected upon the above described premises. If the foundation of the dwelling house is built of cement blocks the same must be plastered on the outside. No building to be erected upon the above described premises within 25-feet of the line of the above premises.”

The minimum price was presumably intended to insure a quality level of construction. Other provisions were somewhat more restrictive than would required under the new zoning by-laws of 1928, for example, in requiring cement block foundations to be plastered over and in requiring 25 feet rather than just 15-feet of setback from the lot lines.

The original owners were as follows:

Professions of the original owners, as listed in street lists from the 1930s and 1940s, include:

J. Irving Connolly (1877-1949), the son of an Irish immigrant, was a Weston resident who built a number of other subdivisions in the 1930s, 40s and 50s. The largest, Pinecroft, included 93 lots (some purchased as double lots) on Pinecroft, Montvale, Fairview and Conant Roads and Viles Street. (See Pinecroft Subdivision Area).