Nathaniel Sibley House
The Nathaniel Sibley House [104 Boston Post Road] was built in 1854, although use of the property for a grist and saw mills goes back to 1679. In 1831 Messrs. Coolidge, Sibley, and Treat bought the property and erected a machine shop and a mill for cotton yarns, which continued under the sole ownership of Nathaniel Sibley from [1850] to 1890. Also manufactured here were iron and steel hardware, wood planing machines, the Sibley dove-tailer, and the Sibley pencil sharpener. The house is noteworthy as a relatively unchanged example of the Italianate style.

Lemuel Jones - Jeptha Stearns House
The imposing three-story Federal style [Lemuel Jones-Jeptha Stearns House, 177 Boston Post Road] incorporates a house built by Lemuel Jones before 1757; the present appearance dates from c. 1807, when unrealized plans for use as a tavern were made. The building was occupied from 1815 to 1822 by Massachusetts Senator James Lloyd, who sold to John Mark Gorgas, a descendent of Huguenot nobility. The property is now used as a school.

Gorgas House
Across the street stands the house [178 Boston Post Road] built in 1842 for J. M. Gorgas’s son, John Louis Gorgas III. The house is an aspiring, though still traditional, example of the Greek Revival style.

Edward Fiske House
The Edward Fiske House [215 Boston Post Road] was built c. 1867; it is the first example of the Stick style in Weston. The assessment on the house when built was the highest in town for a residence.

Winsor House
In 1884 Robert Winsor built his house [9 Hemlock Road] and stable [11 Hemlock Road], the latter now a residence, in the simple Shingle style. Winsor was a partner in Kidder Peabody and Company and a local land developer. This was his first house in town and the first house designed by the young Weston architect, Samuel Mead. Three other Winsor houses were built across the Post Road on what is now Winsor Way. [Only two are now extant, One and 10 Winsor Way].

Otis Hunt House
The Dr. Otis Hunt House [338 Boston Post Road] was built [about 1851] for Dr. Hunt and stood on the north side of the Post Road until [1907]. Interrupting several doctors’ occupancies was the Rev. Edmund Sears, minister of the First Parish Church and author of the hymn “It Came Upon a Midnight Clear.” The house is a particularly lovely example of the Italianate style in Weston.
Elisha Jones House
The Elisha Jones House [22 Church St], 1755, is an exceptionally fine Georgian building with an interesting history. The house was originally built for Elisha Jones, Weston’s first recorded storekeeper, by housewright Jeduthan Baldwin. It originally stood on Highland Street. Jones was active in town government for 28 years, filling several important civic posts, but because of his Tory sympathies, in 1776 he was forced to flee to Boston. The house was confiscated by the Commonwealth and sold in 1782 to Colonel Thomas Marshall, one of George Washington’s officers. The house was moved twice in the 1880s, and additions were made in 1921 and 1932.

First Parish Church
The First Parish Church [349 Boston Post Rd], 1888, is the fourth church building on this site; it replaces a series of structures dating from 1695, 1721 (with extensive renovations in 1800), and 1840 (a temple-front Greek Revival structure). The handsome cobblestone structure was designed by Peabody and Stearns in an English Gothic style and holds a dominant place in the town center near the Town Green. The Church contains stained glass windows by Tiffany and Connick along with a bell cast by Paul Revere. Just behind on church property stands the David Lane Estate Ice House [since demolished.] 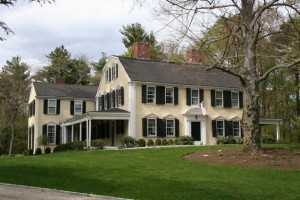 The Elisha Jones House was built in 1755 on Highland Street and moved to its present location at 22 Church Street in 1888.
Weston Town Hall
Two important civic buildings face the large, roughly elliptical Town Green, which was carved out of a swamp in the mid-1910s by Arthur Shurcliff, landscape architect. To the north is the Weston Town Hall, an imposing Colonial Revival structure of 1917 by the Boston architects Bigelow and Wadsworth. The present structure replaced a Greek Revival-style town hall that stood directly on the Post Road.

The present Town Hall was constructed in 1917 from designs by Bigelow and Wadsworth. 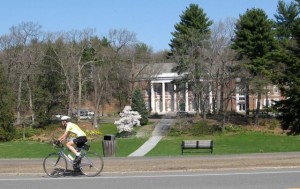 Josiah Smith Tavern
Adjacent to the library is the Josiah Smith Tavern [358 Boston Post Rd], built in 1757 and enlarged in [1804]. In addition to innkeeper, Smith also acted as Justice of the Peace, Town Clerk, Selectman, and Delegate to the Provincial Congress in Concord. The building later housed a store, school, and shoe shop . . . .

Hersum Block
The old commercial center is best represented by the Hersum Block [464-478 Boston Post Rd], which dates to 1890. This wood-frame, Italianate-style block is the only original commercial structure of its period remaining in the district, and by its small size and uniqueness illustrates the limited commercial function of the area. [Note: the Hersum Block was raised to three stories and heavily altered in 1989].

Abraham Hews House
The Abraham Hews House [510 Boston Post Road] was built in 1765 by Abraham Hews, who established a small redware pottery. Sometime after 1794 the pottery was moved down the road to the property of Abraham Hews Jr.  Hews Sr. marched to Lexington with Colonel Lamson on April 19, 1775, and filled a umber of civic positions as well. The delicate federal styling appearing on the house at present probably results from Marshall Jones, who purchased the property in 1824. Jones established a harness and paint shop in the carriage house next door; he also served as Selectman and Town Treasurer.

Samuel Woodward House
The intersection of the Post Road and Concord Road–a triangle filled by Soldiers Park–features several properties of historic significance. The Rev. Samuel Woodward House [10 Concord Rd] 1753, was the home of the second ordained minister of the First Parish Church.

Burying Ground & Cemetery
On the south side of the intersection lie two historic cemeteries: the Farmers Burying Ground, Weston’s oldest with the earliest interment dating to 1703, and, farther west, the Central Cemetery, first interment 1792.

Fiske-Field House
Prominently located opposite the Central Cemetery is the Fiske-Field House [639 Boston Post Rd], a distinguished Federal-style building of 1805. The house was built by Isaac Fiske, a Harvard graduate who practiced law in Weston for 30 years. The Fiske Law Office [626 Boston Post Rd], also built in 1805, stands across the street. Fiske served over many decades as Town Clerk, Selectman, Representative to the General Court, and Registrar of Probate Records for Middlesex County. From 1816 to 1869 the house was occupied by the Rev. Joseph Field, the fourth ordained minister of the First Parish Church, under whose leadership the church quietly changed from Congregational to Unitarian.
Abraham Hews Jr. House
Further west on the Post Road stands the Abraham Hews Jr. House [651 Boston Post Rd c. 1794]. The family pottery operated on this site from c. 1815 until 1871, when the business was moved to Cambridge. Shards are still found behind houses [in the area.]  Not only a successful businessman, Hews Jr. was appointed Weston’s first postmaster in 1812 and acted as Surveyor of Lumber, school committee member, and assessor. Hews gave the land nearby for the second building of the First Baptist Church, constructed in 1828. Hews’s simple, refined Federal-style house is noteworthy for its brick ends. 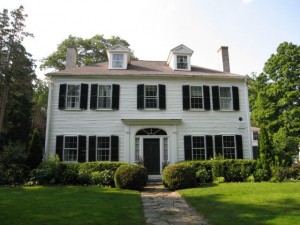 First Baptist Church
The First Baptist Church [ ] 1923, replaced the second Baptist Church building, which was constructed on this site in 1828. The Baptist Society was formed in Weston in 1784, first occupying a small building on the south side of town. The congregation first protested paying the tax for the town-supported First Parish Church in 1780. 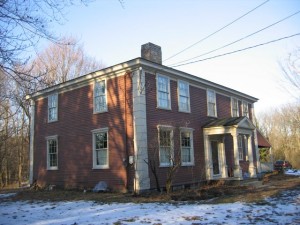 Golden Ball Tavern
Opposite the First Baptist Church is the Golden Ball Tavern [662 Boston Post Rd], 1768, whose property includes an 18th century barn. Both Isaac Jones and the tavern he built played a significant role in Weston’s history. Despite being considered a Tory at the beginning of the Revolution, Jones was re-elected Selectman before the end of the war and continued in office for 10 years; for six years he was Representative to the General Court. The building is open as a museum and is included in the Historic American Building Survey. 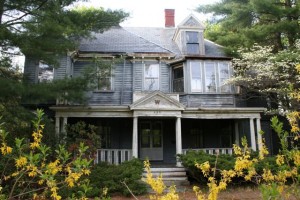 West Center School
The West Center School [700 Boston Post Rd], 1852, was one of six schools built by the town in the 1850s. This small Greek Revival structure was moved from Highland Avenue in 1931 when the by-pass was constructed. It is now used as a residence.

Mirick/Farnsworth House
The [Mirick/Farnsworth House at 751 Boston Post Rd, c. 1721] is set far back and down from the road, behind an orchard– its third location on the same property. The main part of the house was probably built [c. 1721] making it one of the oldest houses in Weston. The property still contains 47 1/2 acres of land.

Vineyard
[Nearby at 787 Boston Post Road is the “Vineyard” ] c. 1777– a transition between the Georgian and Federal styles. It was probably built by Enoch Greenleaf, a merchant dealing in West Indian and English goods. Although Greenleaf had Tory sympathies during the Revolution, he loaned large sums to the town.]

Alpheus Bigelow Jr. House
The Alpheus Bigelow Jr. House [863 Boston Post Rd], 1827, is a large Federal style building. A graduate of Harvard, Bigelow later studied law with Isaac Fiske and Tyler Bigelow. The Bigelow Law Office [3 Applecrest Rd] was built across the road and has been recorded by HABS.
Government Websites by CivicPlus®
[]