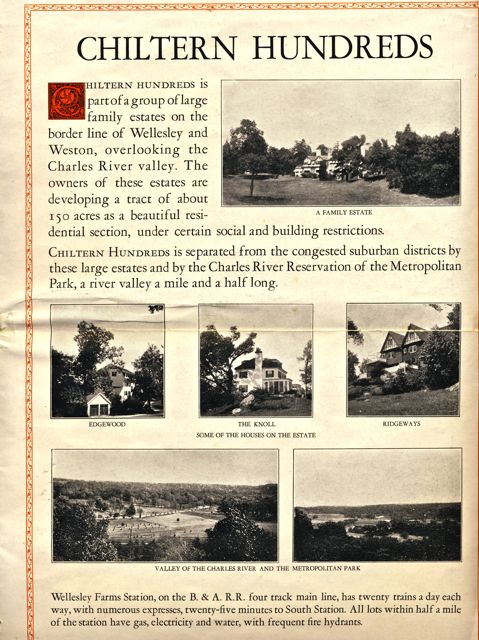 Chiltern Hundreds was Weston’s first large-scale subdivision. Charles Wells Hubbard, one of Weston’s most influential and public-spirited estate owners, conceived the idea; and most of the subdivision was built on his land. To design the development, Hubbard chose Arthur Shurtleff (later Shurcliff), who was then in his forties and well established as a nationally-known landscape architect.

Shurcliff’s original plan shows his intention to establish a sense of community by setting aside land for recreation and schools; however, not all his ideas were implemented. Shurtleff’s design for Chiltern Hundreds, with its curved streets, was influenced by the work of his first employer and mentor, Frederick Law Olmsted, Sr.

Two houses in the Chiltern Hundreds Area pre-date the subdivision. The central core of 153 Ridgeway Road (c. 1881-83/ 1920s, MHC 1093, Map #86) was built in the early 1880s as the maid’s quarters for Ridgehurst, the Shingle-style mansion of Charles Townsend Hubbard and later his son, Charles Wells Hubbard. Sometime around the early 1920s, this north wing was moved from its original location at 80 Orchard Avenue (see area form U) to its present site and made into a separate house. It was enlarged by the Thayer family, who bought it about 1928. The second pre-existing house, at 64 Oxbow Road (c. 1900, MHC 1076, Map #69) was built for S. F. Denton, who purchased the land from Charles Wells Hubbard in 1899. 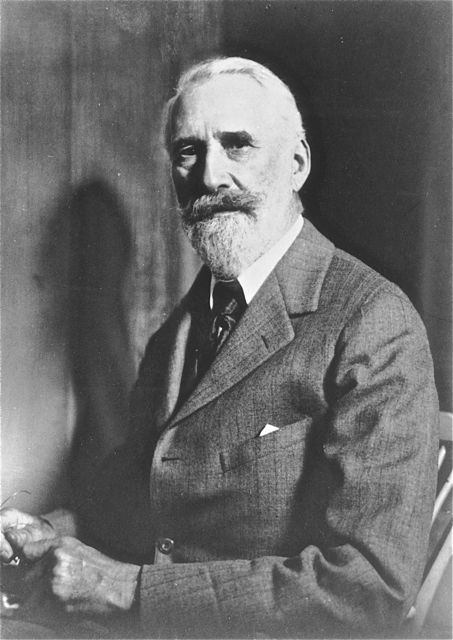 In the fall of 1919, Charles Wells Hubbard turned over 155 acres to a real-estate trust similar to that formed by estate owner Robert Winsor just one year earlier. Eleanor Dean Pearse, only child of Hubbard’s neighbor Charles Dean, joined with Hubbard in creating Chiltern Hundreds, a subdivision recorded in 1925. The first lot sales to individuals took place in the fall of 1925, as recorded on the grantor index at Middlesex County Registry of Deeds.

The term “The Hundreds” refers to the 1699 division of land in Wellesley into 100-acre tracts, and “Chiltern” is thought to be an English place name favored by the Hubbards. According to one observer, the project was “very dear to [Hubbard’s] heart,” as he “felt Weston ought not to be just for the very large land-holder.”

Chiltern Hundreds was by far the largest subdivision in Weston up to that time. Unlike Winsor’s Meadowbrook Road development, where lots were carved out individually for each purchaser, Chiltern Hundreds was laid out as a whole. One plot plan, printed in a detailed promotional brochure issued by Boston realtor Walter Channing in the summer of 1926, shows 168 lots, including several dozen across the town line in Wellesley. The subdivision was the work of Arthur A. Shurtleff, who is now generally known by the last name Shurcliff, which he adopted a few years later. The eminent Boston landscape architect had designed the Weston Town Green in the 1910s, and in the mid-1920s was working on a “Town Plan” for Weston, including zoning guidelines. In Chiltern Hundreds, Shurtleff and Hubbard put into place some of the provisions later required by zoning. Deed restrictions were used to prohibit business and industrial uses and ensure that residences were single-family only. Houses had to be set back a certain distance from the road and property lines. Lot sizes were relatively consistent, averaging between 1/3rd and 1/2 acre.

The winding street plan encompassed the present Chiltern, Locust, Dean, Ferndale, Old Colony, Pembroke, and Columbine roads, as well as the southern parts of Oxbow and Ridgeway roads. Twenty acres were reserved as a “picturesque private park,” including the brook valley and two ponds. Ten acres of this park could be used for future tennis courts, playing fields and a swimming pool “or such similar use and construction as the residents of Chiltern Hundreds shall provide.” Land north of the brook, now Hubbard Road, was designated for future subdivision. Three acres were reserved for a “school house and playground when needed by the town.” Although the school and most of the recreational facilities were never constructed, Shurtleff’s design is a model for a carefully-planned residential subdivision. Not only did he preserve open space and landscape features, but he also thought about future needs and set aside land for neighborhood amenities. 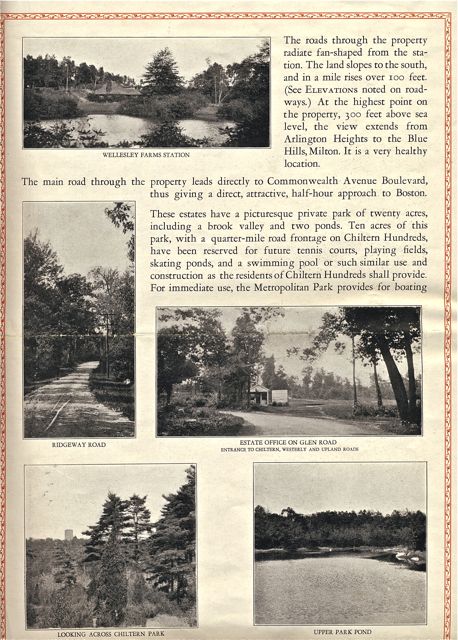 The Channing promotional brochure described Chiltern Hundreds as “part of a group of large family estates” where the owners were developing “a beautiful residential section, under certain social and building restrictions,” which would be “separated from the congested suburban districts.” Lot sizes were large enough “such that the atmosphere of the country will always be preserved, and the feeling and appearance of crowding, so objectionable in many suburban developments, eliminated.” Chiltern Hundreds was lauded as “a very healthy location,” 300-feet above sea level at the highest point, with views from Arlington Heights to the Blue Hills.

The brochure touted the nearby “Metropolitan Park” and four golf clubs within three miles. The minimum cost of houses was set at $10,000. Hubbard’s personal interest in the future of the area is reflected in this statement: “As the proprietors of Chiltern Hundreds live on their adjoining estates, and as their avenues pass through it to reach the station, this development is certain to be guarded with the greatest care.”

Potential buyers were informed that Wellesley Farms Station had “twenty trains a day each way, with numerous expresses, twenty-five minutes to South Station.” Another selling point important in the automobile age was the proximity to “Commonwealth Avenue Boulevard,” which offered a “direct, attractive, half-hour approach to Boston.” Because the area was not within walking distance to stores, the brochure mentions that neighboring houses were already served by three milk routes, three laundry routes, S.S. Pierce Co., and other Boston and local stores that made deliveries. 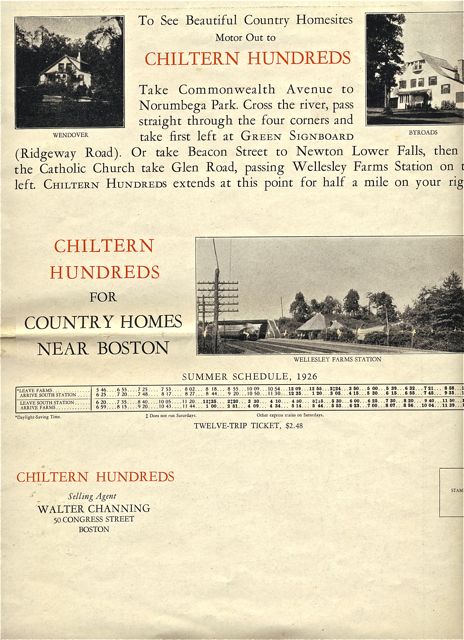 The small wooden sales office was located at the corner of Ridgeway and Glen roads in Wellesley. Lots closest to the train station were the first to be purchased. At the time of the Walter Channing brochure in the summer of 1926, more than 40 lots had been sold for prices ranging from 12.5 to 15 cents per square foot. The adoption of Weston’s first zoning bylaw in 1928 made it necessary to change the size of some parcels. Lots in Chiltern Hundreds sold reasonably well until the 1929 stock market crash ushered in the Depression. It was only in the 1950s, after most of the lots had finally sold, that the real-estate market in Weston fully recovered.