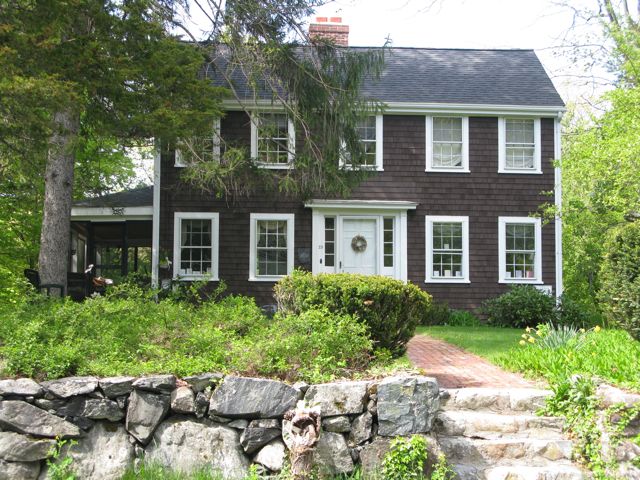 Crescent Street exists as a window in an area where American citizens have lead peaceful, productive lives throughout the entire history of the country.

Originally an Indian footpath between the bay and the interior, the Post Road was the main thoroughfare from Boston, west to Worcester and Springfield, and south to Hartford and New York. What is now Crescent Street was once a section of this former postal route.

Throughout the years, the road’s name evolved from Bay Path to Great Country Road or simply Country Road to its present Boston Post Road. The route was alternately called the Main Road or referred to as Central Avenue in the early 1920s. The name was changed from Central Avenue to Boston Post Road at a Town Meeting in 1927.In a speech given at the 1917 dedication of the new Town House and Common, then Massachusetts Lieutenant Governor Calvin Coolidge described the road as one of the “great arteries of travel.” Naming Weston’s section of the Post Road for listing in the National Register of Historic Places, Candice Jenkins of the Massachusetts Historical Commission stated that “the Boston Post Road was a crucial transportation corridor in Massachusetts, and Weston has the best preserved segment.”

The early established history of the community of Weston is linked to the road itself. Originally part of Watertown, Weston can trace its first documented settlement to 1637, when meadowland in the southern part of present-day Weston was allotted for farming to Townsmen of Watertown.

These early settlers traveled to and from Watertown Center as well as Boston along the route of today’s Boston Post Road, then an Indian footpath called the Bay Path, one of several such trails by that name.

With the settlement of Boston and Watertown, efforts were directed toward the laying out of public roads leading to the west and following the Bay Path branches used by the Indians, thereby preserving this route for its later role.

As farming settlers increased in the western precinct of Watertown, a separate community evolved, which became known as the Farmers’ Precinct or District, and these farmers traveled along the former Bay Path to Watertown for Sunday church services.

As the number of settlers in this farming area increased, sentiment developed for establishing a separate parish organization to eliminate the long weekly trip eastward for church meetings. Responding to a petition by these western farmers of Watertown, in 1698 the colony’s General Court permitted the Farmers’ Precinct to build a church. In the same year, a deed is recorded for property on which to build the church “by side of the road,” indicating the Great Country Road, or the Boston Post Road of today.

The Township of Weston was formally established with its incorporation in 1713.

Concurrently with the settling of the land west of Boston, the use of the former bay path had changed. In 1673, the first postrider made the Boston-New York roundtrip with mail, traveling over what were then mostly Indian trails. This 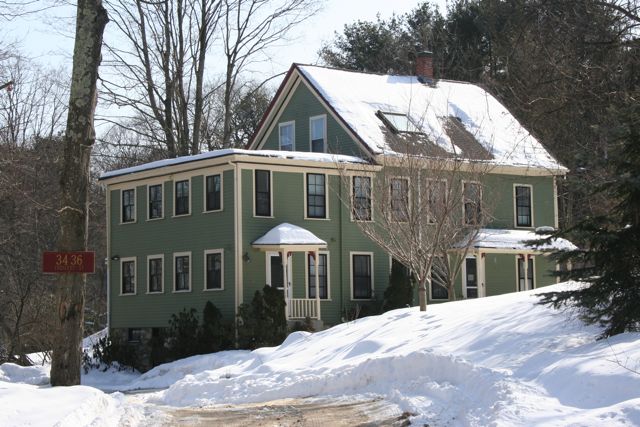 route, which became known as the Great Country Road, was established as a major communication pathway for the colonies. Postriders regularly carried newspapers and mail along this road until the Revolution, providing monthly service. Interruptions occurred only during a brief Dutch occupation of New York and at the time of the King Philip’s War with the Indians between 1675 and 1685.

As settlements grew west and south, the former Indian patch was widened to allow for teams of oxen and horses pulling wagons along the route. The road served as an important conveyance route for farm produce, livestock, and lumber to the growing community of Boston. The streams along the road, one still evident at the western end of Crescent Street, provided watering stops for horses and cattle.

The Great Country Road During the American Revolution

The Great Country Road witnessed significant events during the country’s separation from England. General George Washington passed through Weston over the route on July 2, 1775, on his way to take command of the Continental Army in Cambridge the next day.

In 1777, Paul Revere rode over the road toward Worcester to take charge of the British prisoners captured by General Stark at Bennington, Vermont, later returning along the same path with these prisoners and others from Saratoga and General John Burgoyne’s surrender.

General Knox transported British cannon captured at Fort Ticonderoga over the road via ox-drawn sleds for the defense of Boston. Throughout the war years, troops marched along the road heading for training posts.

The first presidents of the United States traveled along the route of present day Crescent Street, both staying at Post Road taverns in Weston. President Washington, on a visit to New England in 1789, stayed at the Flagg Tavern on the western side of the town.

John Adams journeyed along the route on his way to Washington to take the presidential oath of office and later visited the community while he was president.

Records indicate that Daniel Webster and Samuel Dexter followed the Great Country Road when they first headed south to take positions in Congress. At the time of the War of 1812, militia marched over the road en route to their stations of guarding towns along the coast.

The first public stagecoach traveled the road in 1772. With the initiation of regular mail and passenger stagecoach service from Boston to Hartford in 1783, and later to New York, the Great Country Road played yet another important role in the developing country, providing the pathway for transportation of passengers and mail from Boston to the west and south.

Although the establishment of the Worcester Turnpike through Framingham in 1808 led to fewer coach runs on the former postal route, still as many as 40 coaches passed through the community each week as late as 1840. Until 1885, one stagecoach run per day passed through Weston both east and west.

The road’s role changed as railroads gradually replaced the stagecoaches for transporting goods, mail, and passengers. Railroads were first constructed in the area around 1840, with three lines eventually passing through Weston. One of these lines, the Massachusetts Central, paralleled the postal route through Weston. The last local stagecoach run was in 1886, well after the time that the Country Road was straightened and widened. Crescent Street remains today much as it existed during the time of frequent coach runs.