The earliest house within the area form, One Chestnut Street (ca.1696, MHC 223, Map #1) is generally considered to be the oldest house in Weston and is listed on the National Register of Historic Places.

The house stands on its original site, set back from the corner of two country roads, with a meadow in front protected as conservation land. The house, which faces south, is a brown clapboard saltbox four bays wide, with a large modern ell added to the north at the east end of the lean-to. A large modern barn has replaced an earlier barn. Careful restoration by Philip W. Barker in 1961 revealed that the original house consisted of the two southwest rooms, 1 over 1 (18 by 18 feet), a massive chimney with smoke chamber, and an entry-way and stair on the east end.

About 1720, a lean-to was added on the north side, and about 1760 two additional rooms, 1 over 1 (13 by 14 feet) were added to the east. The earlier lean-to was replaced by a larger one extending across the north side of the house. The next major renovation was in 1961, at which time the paneling and trim in the ca.1696 living room was made to conform to the style of the 1760 rooms. 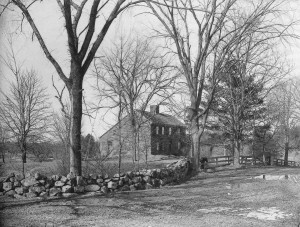